Here are two perfect examples where a cop could ask himself, "Am I acting in defense of Life, Liberty and Property?", or he might simply ask, "Am I 'helping people' or am I a Thug?"


First, I saw this piece on Yahoo news about a woman driving two miles per hour BELOW the speed limit. She also happened to be driving in the left lane. Probably the most egregious offense was being in front of the cop when he approached her in the left lane. This is most likely an example of failure to render obeisance. 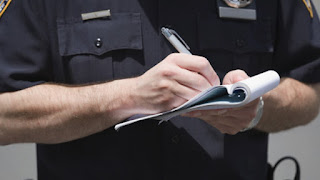 Next, we have an example of a group of policemen gladly taking a woman to jail on the flimsiest allegations. She was merely protesting her property taxes being raised, based on an assessment by a private company which works for the county, which is trying to assess the property values more highly in order to increase the taxes on them.

There are two sources on this incident. One is Inforwars dot com, and another is Examiner dot com,  either of them has a complete write up and you can get a full account, except of course for the County's side which is something you don't need to know.


This woman had the unmitigated gall to quote the Constitution at a public meeting. What happened after that should make your blood boil... if you are an American. She was escorted out of the meeting hall, followed to her car and then told, quote from examiner dot com:

"See if you are able to pay your property taxes NOW!"


When she arrived home there were five patrol vehicles and a paddy wagon. She was arrested on an allegation, transported to the police station, booked, handcuffed to a chair, and told she had to surrender two firearms she legally owned. Quote from the Infowars piece:

After police arrested her, they demanded she hand over her two guns, a .357-caliber Smith & Wesson revolver and a .40-caliber Glock for “safekeeping.” If she had refused, a judge would have set bail too high for her family to pay.

These incidents, folks are perfect examples of opportunities for Policemen to ask them selves "Am I doing the right thing? Am I defending Life Liberty and Property?" If they never ask the question, they are prone to thuggery, because they will do what ever their supervisors tell them to do. If they do ask the question but do the wrong thing anyway, they are Oath Breakers and simply do not care.

These are also examples of opportunities for those Good Cops we keep hearing about, you know, the ones who are supposedly in the vast majority, to stand up and say "No, I ain't doin' it!" These are the perfect opportunities for those Good Cops to stop the bad ones, you know the few bad apples we keep hearing about, from doing the wrong thing and to correct their behavior.

What do you suppose would happen if, when the cop wrote the ticket for going two miles under the limit, when he got back to the station, he was vigorously corrected by his peers? Anything? You think peer pressure, at a minimum, might change the way he conducts himself?

What do you suppose would happen if, when the woman who protested her property taxes was actually protected by the police in her right, first to her property, and second in her right to keep arms in her home? Anything? Do you think any of the Thugs who arrested her actually stopped and gave some thought to her rights? No, they were just doing their job. They went and arrested a peaceful woman, who had no criminal record, and who exercised her right to speak at a public meeting, on an empty allegation, with no investigation done to validate the allegation. They were told to go out and ruin a woman's life and that is what they did.

You want another example? Try this one, where cops get caught on video planting "evidence". Later, when the video is shown by the local press, the charges get dropped because the "evidence" cannot be located. Shucks by golly! Who would have thought of such a thing?

And they did it because they are such "Good Guys" right? Opportunities abound.

Civilian Policemen, you DO have a choice. You can be Constitutional Peace Officers, or you can be Law Enforcement. Go to this website for more information.

Our founding fathers, and the framers of the Constitution, warned us about keeping up standing armies in times of peace. This is exactly what they were talking about. This abuse of people's liberty is exactly what they envisioned when they proscribed the keeping up of armed bodies, paid by the government to do it's bidding, among the peaceful population.

What is the difference between this, 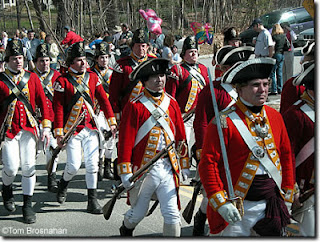 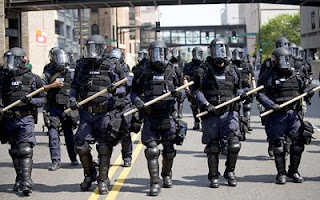 When Malice is Obvious... Call it Malice Not Stupidity!

This piece at Max Velocity got me riled a bit. Instead of posting a long and winded reply over there, I thought I might expand my thoughts on my own page.

His premise is, never attribute malice to that which can be explained by stupidity. I respectfully disagree.

Malice: the desire to inflict injury, harm, or suffering on another, either because of a hostile impulse or out of deep-seated meanness. Malice is a legal term referring to a party's intention to do injury to another party. Malice is either expressed or implied. Malice is expressed when there is manifested a deliberate intention unlawfully to take away the life of a human being. 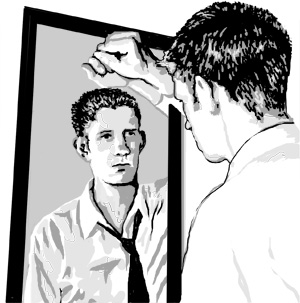 ATF agents facilitated the smuggling of weapons to the narco-gangs in Mexico, not out of stupidity, but malice. FBI agents murdered eighty people at Waco, not out of stupidity, but malice. Vicky Weaver was shot dead, not by a stupid man, but by a malicious one. The MOVE families in Philadelphia weren't firebombed and killed by the City's stupidest. Leftist members of Congress continually attempt to disarm the peaceful and law abiding, not because they are stupid, but because they are full of malice, hatred, and a burning desire to control every living being on the planet. The Department of Homeland Security (God help us, I never thought I would utter such words) is buying Two Billion rounds of hollow point ammunition, and it isn't because they are stupid.

If any man works for an agency, the function of which is a violation of his oath of office, he cannot say he is on the patriot/constitutionalist/liberty side. He cannot say he's one of the good guys. He cannot say he will do the right thing when the time comes while doing the wrong thing now. He will not be able to hide behind the defense of  "just doing my job..." when he is tried for crimes committed on duty. He cannot say, after the fact, that he didn't know his agency had an anti-constitutional agenda and purpose.

If he can go to work day after day doing the job he chose, in defiance of his oath to support and defend the Constitution, he is not and will never be on the patriot/constitutionalist/liberty side.

He may mouth the words, but his actions define him.

Police Officers, I am not anti-cop. I am anti-bullying, and anti-thuggery. I am very much in support of Constitutional Peace Officers. If you think that makes me anti-cop, you have just defined yourself. No one WANTS to believe you are all bad guys. Most of us want to believe the MYTH that you are all good guys just trying your best to do a tough job with little appreciation.

If a mere mortal, you know, a "civilian", brutalizes or murders someone, he will be arrested and jailed, and when convicted, punished and wear a scarlet letter as long as he lives. A cop on the other hand, if he brutalizes someone, kills a person unnecessarily, or violates any of a slew of laws which would get a mere mortal "civilian" arrested and charged, he will most likely get a pass. His gang will protect him. Eric Scott, Kelly Thomas, Oscar Grant, Michael McCloskey, and Jose Guerena come to mind. There are hundreds of others. Good cops, if they were in the vast majority, would police their own ranks to such an extent, that bad cops would be extremely rare, but they are not. They are common. Do you think Lon Horiuchi was taken back to the team room at Quantico and beaten to a pulp by his fellow Hostage Roasting Team members? Did he immediately retire and find another line of work? Did he turn himself in for prosecution when he was charged, by a grand jury in Idaho, with manslaughter?

How many videos are there on Youtube of citizens being harassed by cops for exercising their natural right to open carry a sidearm? Hundreds? How many opportunities have there been in those situations for the "good cops" to tell the bad ones, "Hey Joe, you're steppin' on yer dick. I think you need to make a phone call..."

How many videos are there of bad cops brutalizing citizens, because they want to, and they know they will get away with it? Hundreds? How many opportunities are there in those situations for the "good cops" to tell the bad ones, "Hey Joe, you're gonna have a seat in the back of my cruiser and you and I are gonna take a ride down town..."?

One might see the firing of the first shot at Lexington in 1775 (most likely a British officer firing his pistol into the air) as an act of stupidity. But the march out to confiscate cannon, powder, and shot along with any small arms to be found, was an act of malice.

One might see the firing of the first shots at Waco (most likely the killing of the dogs near the front door) as an act of stupidity. But the planning and initiation of a Raid on a peaceful community, was an act of malice.

The time is near at hand. Will we live as free men? Or will we swallow the blue pill and go back into the Matrix? Will we go back to sleep believing the myths while struggling under the yoke?

Is your Slave Master nice?


Posted by Longbow at 9:19 PM 7 comments: Links to this post

A Cop Wakes Up or Welcome to the Real World

Chris Hernandez has a very insightful piece about cop culture. Chris should be commended for telling the truth. I hope and pray that more men like him will do likewise. One is better than none.

Go read the entire piece and remember that he is in the minority.

" I had been something of an idealist about cops. I thought American cops would go by what’s right and wrong instead of looking for what they can legally get away with."

"I know now that cops like Joe have no problem violating people’s rights, as long as they have some “official” way to do it."

" Keep in mind, I became a police officer because I wanted to be a good guy. Even though we’ve all seen reports of police brutality and corruption, I still believe we cops are the good guys."

(You're hearing this from whom? Your fellow cops? Those stand up good guys you revere so much? Those super-swell heroes who swore an oath, like you did, to support and defend the Constitution?)

Welcome the the real world, Chris. Most citizens have to go through a good Law Enforcement fucking before they wake up. Better late than never.


Posted by Longbow at 10:00 AM No comments: Links to this post