Then read the money quote at the end, " Women who successfully complete Ranger School will receive a certificate and be awarded the coveted Ranger tab." The DAMNED outcome has been predetermined.

There is no way any woman is going to make it through the course unless she is carried. If they force a woman through and pin a Tab on her, it lessens the value of the Tab for every other Ranger School graduate who earned his. If that happens, it will be used as a precedent to force women into every other aspect of military life which ALL OF HUMAN HISTORY says they cannot tolerate nor sustain. This will weaken the force over all. Ultimately, that is what is desired

Girls do NOT belong in the Infantry. They damned sure don't belong in Ranger training. There may be a bull dyke, out there in the world, who could make it through the Ranger Course. This would be an exceptional exception to the rule. Making national policy based on a one in ten thousand exception to the rule is a recipe for disaster/suicide. Ranger school is HARD for a reason. It tests the best and hardest of men. Girls, by design are not HARD. Dear Lord we are having this discussion because our National leaders are out of their minds. 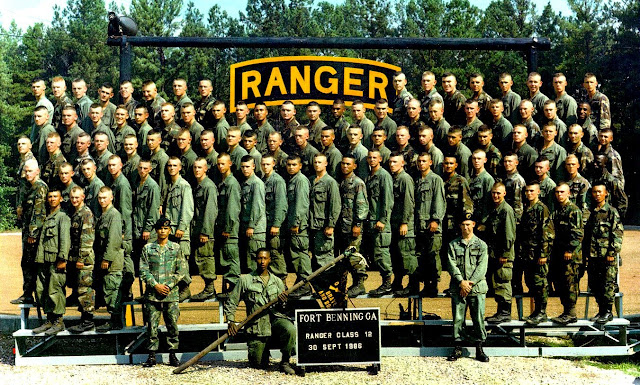 This is my class. Look at the faces. Do they look healthy? The photo was taken AFTER we had been back on solid food for three days. Go here to look at a larger photo.

I attended the course as a PFC from the First By God Battalion. I was conditioned for it for over a year before I got my slot. It was hard for me and on me. Not impossible, but hard. My body was broken down at the end. It took weeks to initially recover and months to FULLY recover. I had open sores which didn't heal until after I got back on solid food. My endocrine system was interrupted to the point my nuts didn't function for almost two weeks after graduation. I started the course at 175 pounds and graduated at 145.

May God have mercy on us.